Michael Cooper is the Conservative Member of Parliament for St. Albert-Edmonton. First elected in October 2015 and re-elected in October 2019, Michael serves as member of the Standing Committee on Justice and Human Rights. Earlier in the current Parliament, Michael served as the Official Opposition Deputy Shadow Minister for Finance and as a member of the Standing Committee on Finance.

Michael has been a strong advocate for victims and strengthening Canada’s criminal justice system. Michael sponsored Bill S-217, known as Wynn’s Law, in honour of the late Constable David Wynn who was shot and killed by a career criminal out on bail. Wynn’s Law would amend the Criminal Code to make it mandatory for the criminal history of bail applicants to be disclosed at bail hearings, something that could have saved the life of Constable Wynn.

After an increase in vandalism to police and other first responder monuments across Canada, Michael is working with Conservative Senator Leo Housakos in championing Bill S-221. The Bill seeks to add significant penalties for anyone convicted of vandalizing a monument dedicated to police and other first responders to ensure that perpetrators of such reprehensible acts are held accountable under the law.

Michael has also been an advocate for jurors, which represents the last form of mandatory civic duty in Canada. In the last Parliament, Michael introduced Bill C-417, which seeks to amend the Criminal Code so that jurors suffering from mental health issues arising from their jury service can disclose all aspects of their jury service with medical health professionals without criminal penalty. The Bill passed unanimously at all stages in the House of Commons, a significant achievement given that few Private Members’ Bills introduced by opposition MPs pass at any stage. The 2019 election was called before the Bill could be voted on in the Senate. Following the election, Michael is working with Conservative Senator Pierre-Hughes Boisvenu in championing similar legislation, Bill S-212, introduced by Senator Boisvenu in the Senate.

Michael is a lifelong resident of St. Albert and an active community volunteer. He is a Lector at St. Albert Catholic Parish and a member of the Knights of Columbus, St. Albert Rotary Club and the St. Albert and District Chamber of Commerce.

A graduate of the University of Alberta, Michael received a Bachelor of Arts and a Bachelor of Laws, both with distinction. He was called to the Alberta Bar in 2010. Prior to being elected Michael worked as a civil litigator at a leading Edmonton law firm. 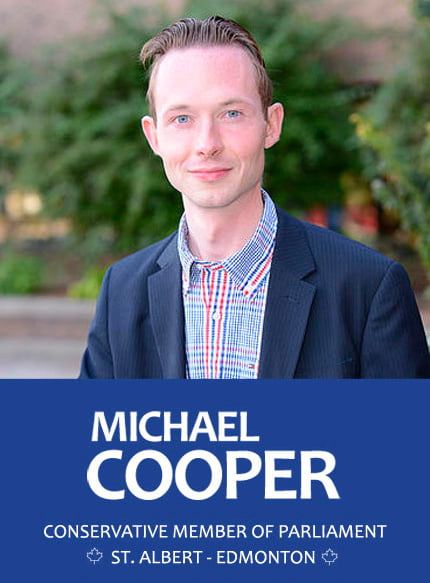 Get in touch
© Copyright 2021 Michael Cooper. All rights reserved.